As in much of the rest of Africa, many cities across the Somali Horn of Africa are expanding rapidly. This urbanisation is driven by a variety of factors. These include historical patterns of internal flight, evictions and resettlement; ongoing displacements of rural populations as a result of armed conflict and ecological shocks; and the investment and return of overseas populations. The Security on the Move research project focuses on four Somali cities and looks at the ways in which patterns of migration are shaping dynamic and diverse processes of urbanisation. Somali cities are changing, and much of this change is influenced by ‘internally displaced people’ (IDPs), a type of migration that is diverse with respect to causes, patterns, direction and duration of movement. Newly arriving IDPs, however, are often among the most vulnerable population groups in cities. The research project explores the ways in which IDPs shape the development and government of the four cities. It aims to explore in depth the experiences and concerns of IDPs, and thus prioritises subjective viewpoints.

The Security on the Move research project examines displacement and urbanisation in the cities of Baidoa (Baydhabo), Bosaaso, Hargeysa and Mogadishu (Muqdisho). These cities are ‘Somali’ cities, in that they are all ‘officially’ within the internationally recognised borders of Somalia and they are all home to populations who largely identify culturally, ethnically and linguistically as ‘Somalis’. However, they are shaped by varying historical patterns of conflict and displacement, have different economic features and are administered by different political bodies. The following will briefly introduce some of these features.

Mogadishu (Muqdisho) is the capital of the Federal Republic of Somalia. As port city on the Indian Ocean It has a long history of international trade connections, which is visible in its architecture, infrastructure and overall layout. Mogadishu became among the worst hit centres of the Somali civil war. In the aftermath of the 1991 overthrow of dictator Siyaad Barre, the city faced severe inter-clan fighting. Being nostalgically remembered by some older inhabitants as a ‘pearl of the Indian Ocean’, much of the city’s architecture was destroyed during this period. This large-scale destruction is still visible in a large number of shattered buildings, many of them occupied by squatters, and often located in the belt of ruins along the former ‘green line, a stretch of no-men’s land that divided Mogadishu in two parts, both under the rule of different clan militias. The city faced several waves of forced displacement, often targeting people with particular clan backgrounds, in particular in 1991 the forceful displacement of people affiliated with the clan family of Siyaad Barre. 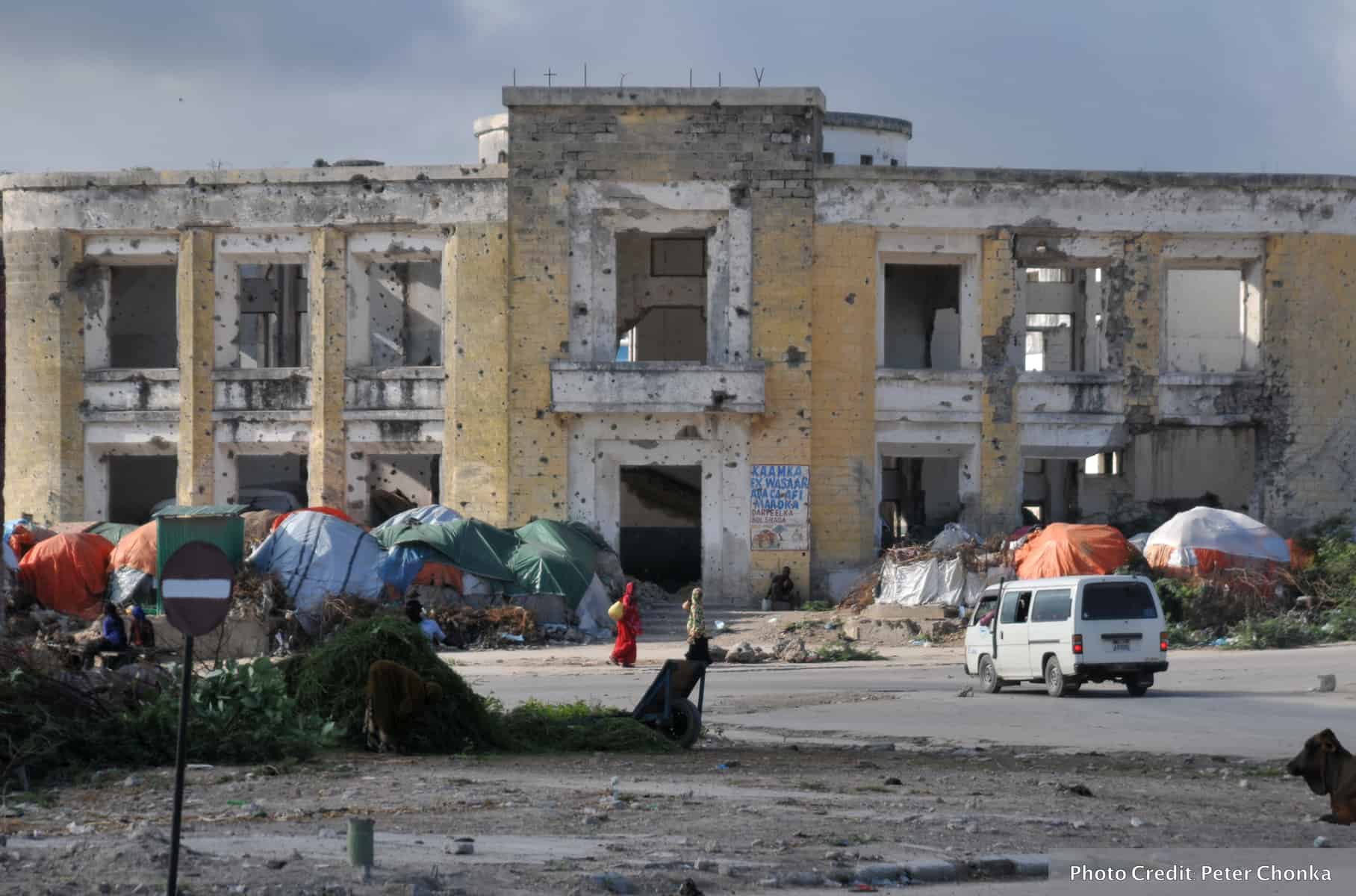 Decades of instability in Somalia are reflected in its capital city. Between 1991 and 2005, Mogadishu was divided among different clan factions, and was characterised by highly localised forms of clan-based and Islamic authority. The Islamic Courts Union that managed 2005 to put the country under a single administration, was in 2006 ousted by an US-backed Ethiopian invasion. This enabled the Transitional Federal Government (TFG), formed after two years of negotiations among the major warlords in Kenya, to establish base in Mogadishu. The TFG was succeeded in 2012 by the Federal Government of Somalia (FGS) and since 2007 has been challenged by an Islamist insurgency, spearheaded by Al Shabaab. The FGS is backed by an intervention force of the African Union (AMISOM) and the political support of the United Nations. Mogadishu, has between 2006 and 2013 witnessed further rounds of large scale fighting, with each wave resulting in deaths, massive displacements and destruction of buildings and infrastructure. While the FGS and its allied international and national forces ousted Al Shabaab formally from the city in 2011, the organisation still launches regular attacks, and allegedly still holds informal control over parts of the city and its population.

The FGS has re-established Mogadishu as the capital of Somalia, but holds its authority mainly due to the African Union Forces and multiple international security ‘partners’. Although Al Shabaab violence continues against both government and civilian targets, the city has witnessed something of an economic renaissance since 2012. Improved security conditions have prompted significant diaspora investment and important commercial zones – among them Mogadishu’s famous Bakhara market or the Makka Al Mukarama thoroughfare – are abuzz with new business activity. The city is also witnessing a construction and building boom. At the same time, and over the last decade, continued instability and periodic famine in the rest of south central Somalia have made the city a draw for large numbers of IDPs. Settling in abandoned plots or semi-organized camps, IDPs have contributed to the sprawl of the city. They are also often involved in disputes over the reclamation of property that date back to state collapse and earlier population displacements. 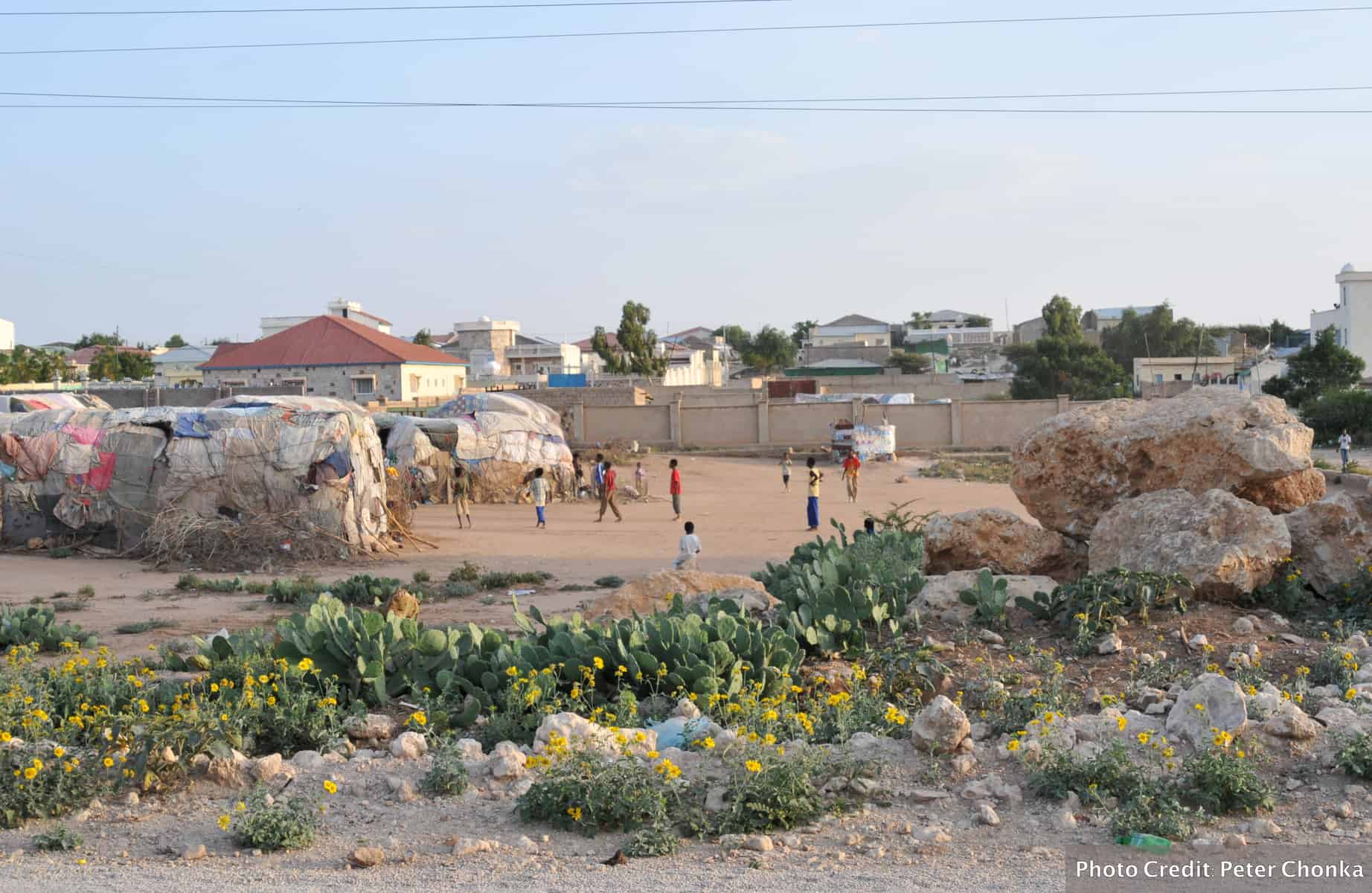 Hargeysa is another capital city – in this case that of the de facto independent (but not internationally recognised) Republic of Somaliland. Somaliland in the north west of the Horn of Africa declared its secession from Somalia in 1991 following the overthrow of the military regime in the south. The Somali National Movement (SNM), a north western based militia that fought for nearly a decade against the military regime, initiated in 1988 the civil war in the country. Hargeysa, which was considered the ‘home city’ of the SNM, and its population was since the 1980s under constant attack by the military regime. This peaked in 1988 with the razing of the city to ground by artillery and aerial bombardment. The majority of the city’s inhabitants were forced to flee, many into camps across the border in Ethiopia. The 1990s saw relative stability and independent political development in the new Republic of Somaliland, along with its capital, Hargeysa.

Although the city faced further rounds of infighting in the mid-1990s, its successive stabilisation was by the turn of the new Millennium reflected in the large-scale return of its formerly displaced inhabitants. The city’s population grew significantly and the city expanded considerably in the subsequent decades. Again, the investment and return of Somalis from the diaspora has played a crucial role in the city’s economic revival. Today, the inland city is an important economic hub, linking international and regional trade and investment. It is also home to key telecommunications, remittance finance and retail businesses. Over the years, Hargeysa has also been a destination for significant numbers of internally displaced people from other areas of Somaliland, from south-central Somalia and from Ethiopia. With much of the population having had personal experience of displacement, and with long-standing IDP settlements forming neighbourhoods within the urban environment, (forced) mobility has been an important aspect of the city’s life and evolution.

Another inland city with its own distinct experience of IDP settlement is Baidoa (Baydhabo), the regional capital of Bay and since 2014 also the administrative centre of the Southwest State of the Federal Republic of Somalia. Located between the rivers Shabelle and Jubba, Baidoa has been the agricultural hub of Somalia. The South West State is historically home to predominantly agro-pastoralist population groups who rely on both sedentary agriculture and nomadic livestock rearing. These populations are often differentiated from the predominantly pastoralist groups of the central and northern regions, and many of them speak Af Maay, a language differentiated from the Af Maxaa Tiri dialects that were formalised in the 1970s as the ‘standard’ Somali language. Such differences have influenced the historical course of conflict in the southwestern region, which was several times invaded and raided, and over longer periods also occupied by militias from other parts of the country. Particularly during the 1990s, the population in the region faced widespread harassment, killing, and forced displacement. 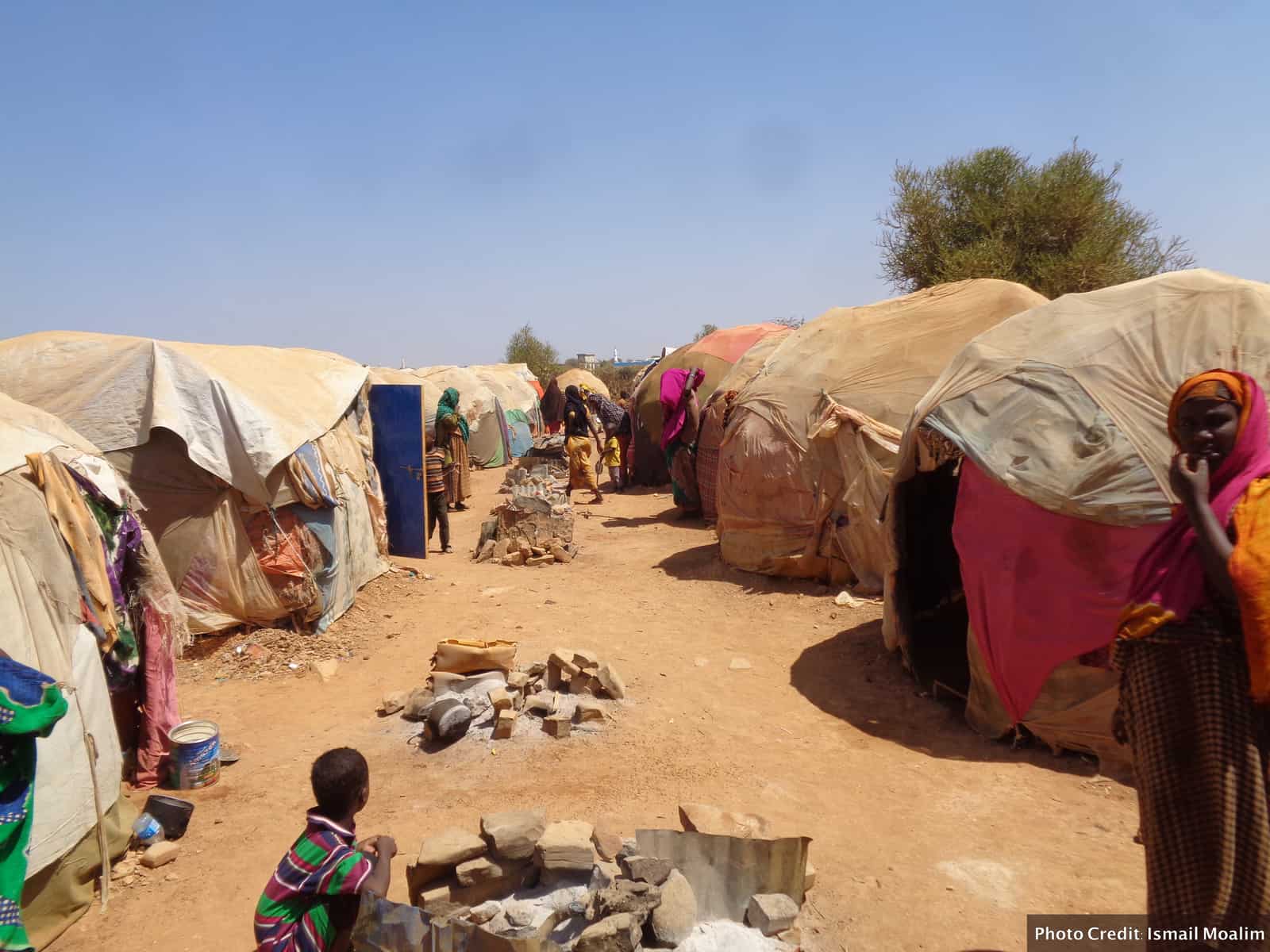 Baidoa also became the centre of the war-induced famine that killed hundreds of thousands in the beginning of the 1990s and led to the first humanitarian intervention of the UN. The city is today home to an African Union military presence, with a large contingent of Ethiopian forces. Baidoa is surrounded by areas still under the control of Al Shabaab. Today, migration into the town is caused by conflict that continues in the region between Al Shabaab, foreign troops and militia aligned with the Federal Government. Such instability causes or exacerbates periodic drought and famine that further intensify displacement. 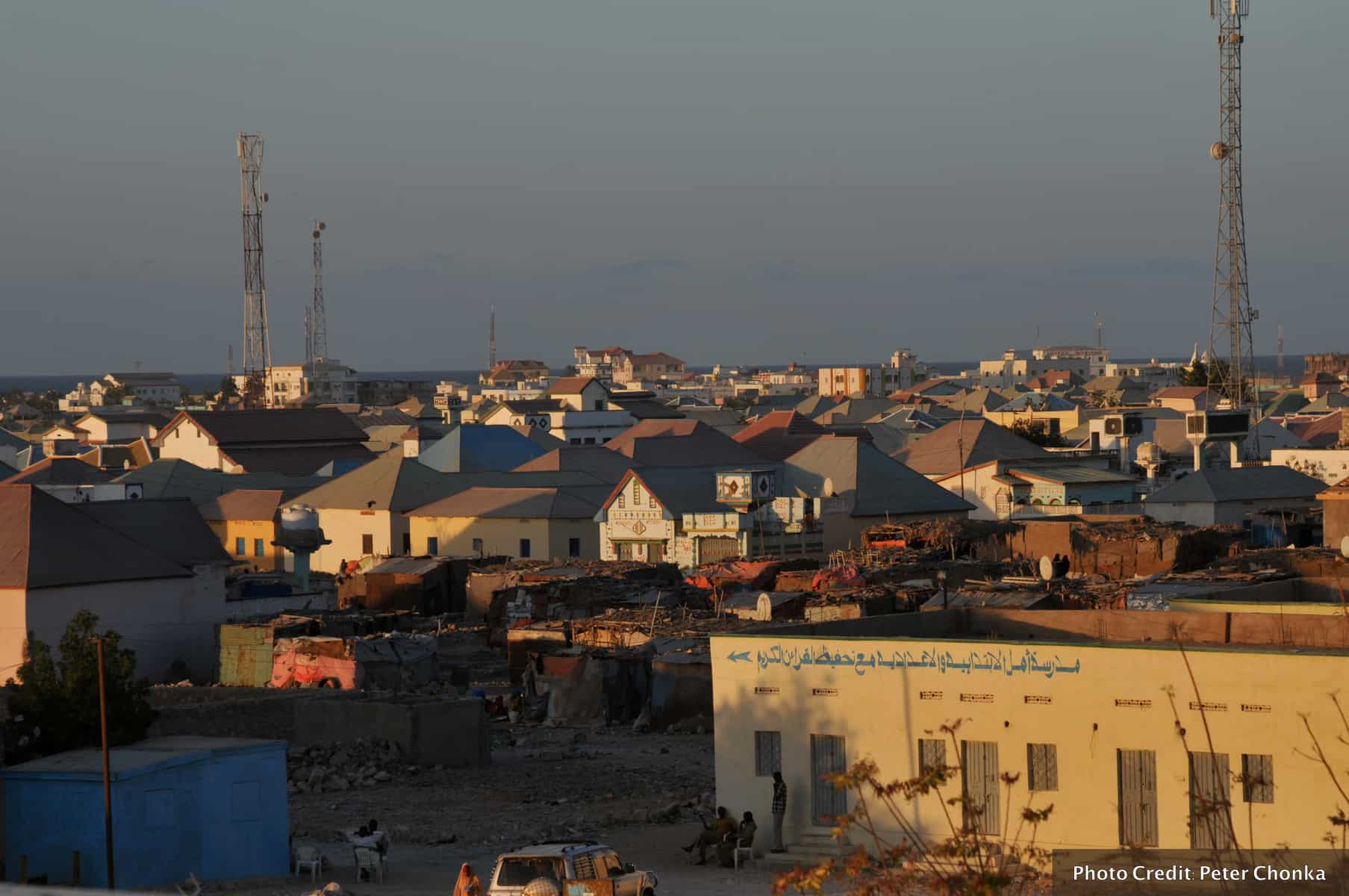 Although Bosaaso on the north-eastern coast of the Horn is not the political capital of the Puntland State of Somalia, it is undoubtedly its primary economic hub. Puntland is an autonomous, but, unlike Somaliland, non-secessionist administration. Formed in 1998 Puntland is today aligned with the Federal Government of Somalia and is one of its component states. Close to the Galgala hills and located on a coastal plain that swelters in summer, Bosaaso is an important port city and is connected by road to the rest of Puntland, south-central Somalia and Somaliland to the east. The port’s shipping and fishing capacity is likely to be increased by the ongoing development and investment of Gulf states such as the United Arab Emirates, a trend that is also seen in other port cities. Compared to other regions, Puntland in general and Bosaaso in particular, remained relatively stable during the civil war, and only faced short periods of conflict.

Al Shabaab and, more recently, a local Islamic State affiliate are active in the nearby hills and further along the coast. Periodic fighting with Puntland security forces contributes to a degree of insecurity. Bosaaso is home to significant numbers of IDPs who have primarily fled conflict in southern Somalia. Many people have been drawn to Bosaaso given its road links with the south, as well as its position as a staging post for onward migration across the Gulf of Aden to Arabian Peninsula.

With these four different urban contexts in mind, our project aims to examine the commonalities and contrasts between people’s experiences of security in terms of their movement to and within the city and the ways in which mobile populations are navigating and negotiating the conditions of their (temporary or long-term) settlement in cities. In doing so, we hope to highlight some of the challenges that urban IDPs and other urban residents face in their daily lives. The research project therefore draws on people’s subjective experiences with the aim of deepening understandings of security, (forced) migration, and urbanization.